AS THE NAME IMPLIES, TOTAL WAR IS NOT FOR THE FAINT OF HEART

Given just how jam-packed this formula is, each serving of REDCON1 Total War yields a total of 14.7g. That’s practically double the standard serving size we see in other pre-workout supplements on the market. We would however expect this, as REDCON1 Total War markets itself as a ‘complete’ formula, and therefore contains efficacious dosages of ingredients which deliver energy, focus, endurance and muscle pumps. 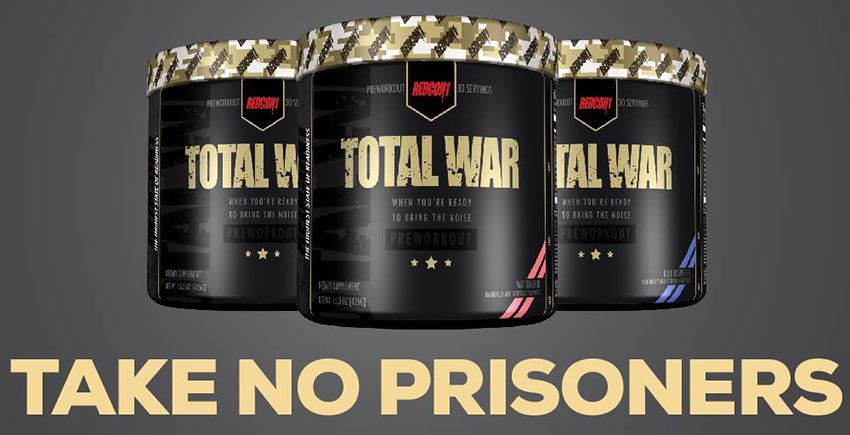 The first ingredient used in the formula of REDCON1 Total War is Citrulline Malate, which works to support muscle pumps, the transfer of nutrients and oxygen to working muscles and vascularity. Of all the nitric oxide inducing ingredients, citrulline malate has been shown to be the most powerful! It also supports endurance by acting as an intracellular buffer and assisting the production of ATP. citrulline malate is the preferred form of citrulline as it has shown to be far more effective, whilst also reducing post exercise muscle soreness, increasing grip strength, energy production and muscle explosiveness. This form has also been shown to be effective immediately, whereas others have need to be loaded to carry out the same effects. The efficacious dose of citrulline malate is 6g, which is quite large and often not seen in most products on the market. REDCON1 Total War have included the entire 6g in their formula. This is impressive and guaranteed to give you the skin splitting muscle pumps and performance benefits that it delivers.

The next ingredient featured in the formula of REDCON1 Total War is Beta-Alanine, which works to increase the concentration of carnosine in muscles. Carnosine scavenges reactive oxygen species, acting as a potent buffer against fatigue toxin production in working muscles. Reduced fatigue toxin production allows muscles to perform more reps, more sets and do more work before fatiguing. beta-alanine therefore allows you to train harder, for longer, and stimulate more muscle growth. Beta-Alanine can also help increase performance for high intensity cardiovascular events such as sprinting and cycling. The clinical dose for this ingredient is 3.2g and REDCON1 have again cut no corners and included the full dosage in each serve of REDCON1 Total War.

Next up in the REDCON1 Total War impressive, lengthy formula is Agmatine Sulfate. Agmatine Sulfate inhibits the enzyme that breaks down nitric oxide in your body, resulting in the maintenance of higher overall nitric oxide levels. Nitric oxide promotes enhanced blood flow to muscles by reducing the friction associated with blood flow. Enhanced blood flow encourages better "muscle pumps" and vascularity during and after your workouts, while also promoting more efficient nutrient and oxygen delivery to muscles. The efficacious dose of Agmatine Sulfate is 1000mg, and it’s no surprise that REDCON1 Total War contains the full clinical dose of this ingredient.

By now, it should be evident that REDCON1 Total War is already superior in its provision of muscle pumps and muscular endurance. Up next is Taurine, which has been shown to contain properties that assist in the regulation of muscular contraction and force during strength and aerobic activity. In particular, taurine acts to increase muscle force production and enhance fatigue resistance from severe high-intensity exercise by increasing the efficiency of the heart (stroke volume) and maintaining cell volume (osmoregulation). It has been suggested in studies that the combination of taurine and caffeine offers significant improvements in mental performance, which is beneficial during times of physical activity. The efficacious dosage of taurine ranges between 500-2000 mg, and REDCON1 Total War have included a full gram in their formula, which is acceptable and within the recommended range.

There are 250 mg of Caffeine in every serving of Total War. Caffeine is the world’s most popular stimulant. The dosing here is quite conservative because of all the other stimulants that have been included. This means that you will not be hit by the wired, manic jitteriness that people often feel with supps that are loaded with caffeine. 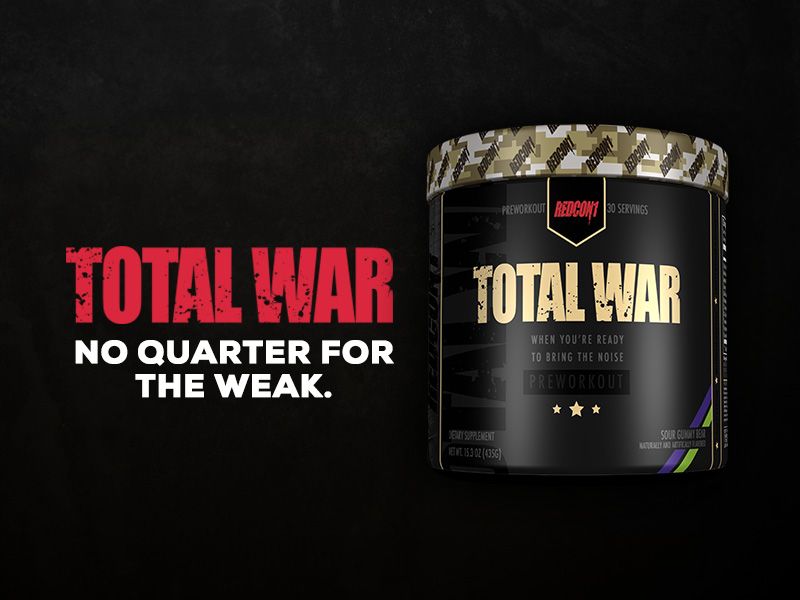 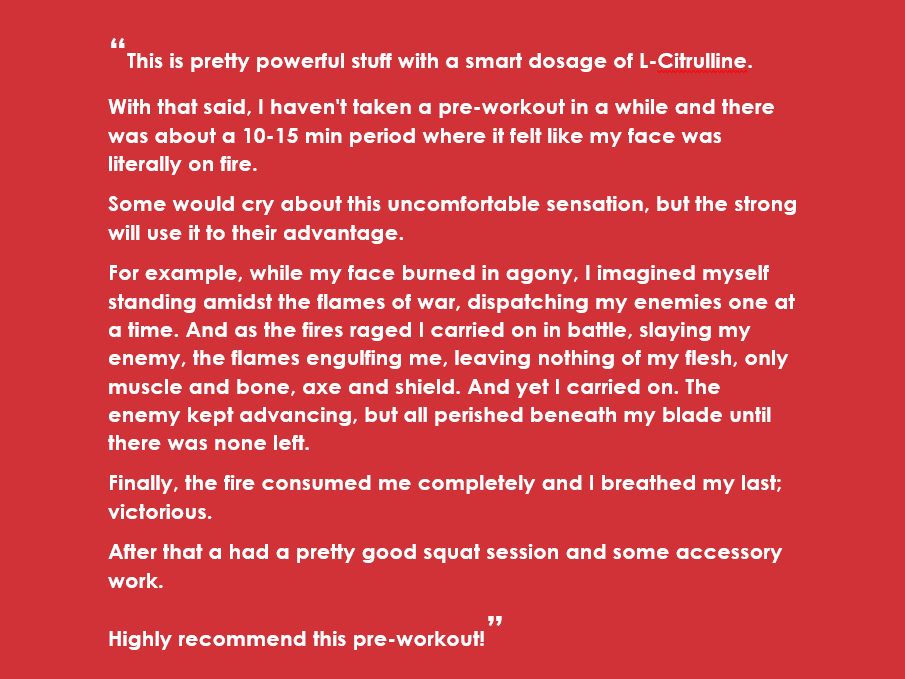 AMPiblast™ – an ingredient derived from the berries of the Juniper plant (Juniperus Communis) is another important ingredient in REDCON1 Total War, with 150mg per serving. AMPiblastTM can help improve the effectiveness of your pre-workout supplement as it provides a steady source of energy while training which can provide an additional “boost” to bodybuilders when working out.

Cocoabuterol (Theobroma cacao) – contains a range of naturally occurring compounds, such as methylxanthine and phenylethylamine. These compounds are believed to boost mood, fat-burning, muscle protein synthesis and have antioxidants effects.

Naringin – a flavanone glycoside commonly found in citrus fruit. It assist in fat-burning. The clinical research so far supports its use for obesity, diabetes, high blood pressure and metabolic syndrome.

Bioperine (Black Pepper Fruit Extract) – referred to as a universal absorption enhancer. Due to this effect it may help to increase the potency of all the ingredients in REDCON1 Total War.

Total War is designed to be taken by both men and women. When you take it as directed, it will produce an incredible muscular pump while you’re working out. It will also provide you with a sustained release of energy throughout the entire training session, without a crash. In fact, you will get an hour and a half of enhanced energy, that will slowly trail off naturally.

All of the ingredients used in Total War have a scientific basis for their being in the product. There are no proprietary blends in this product, which means that you know exactly what you are getting and in what quantities. RedCon1 are particular in ensuring that the doses of each ingredient match up with the clinical recommendations. 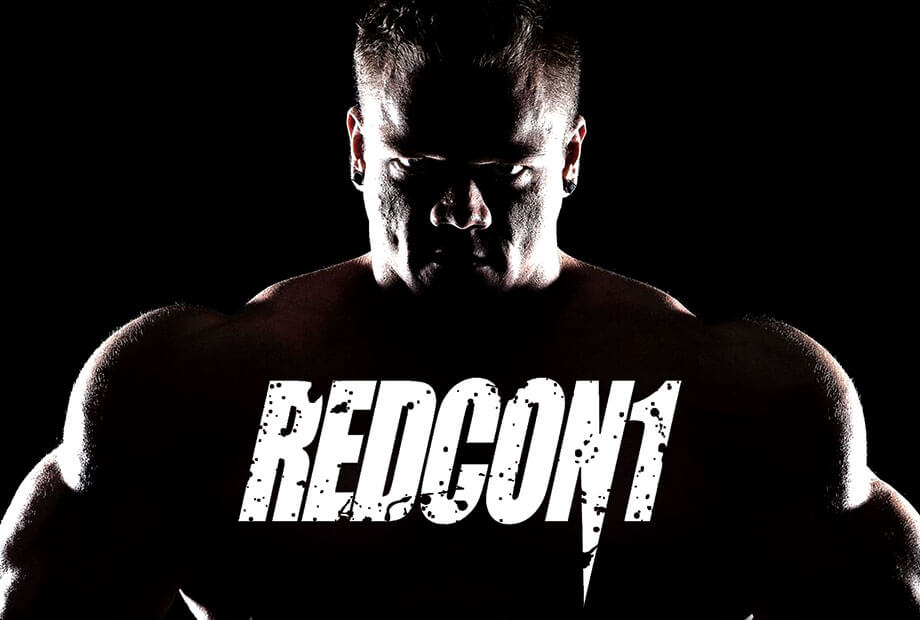 View all posts by: Zone Nutrition